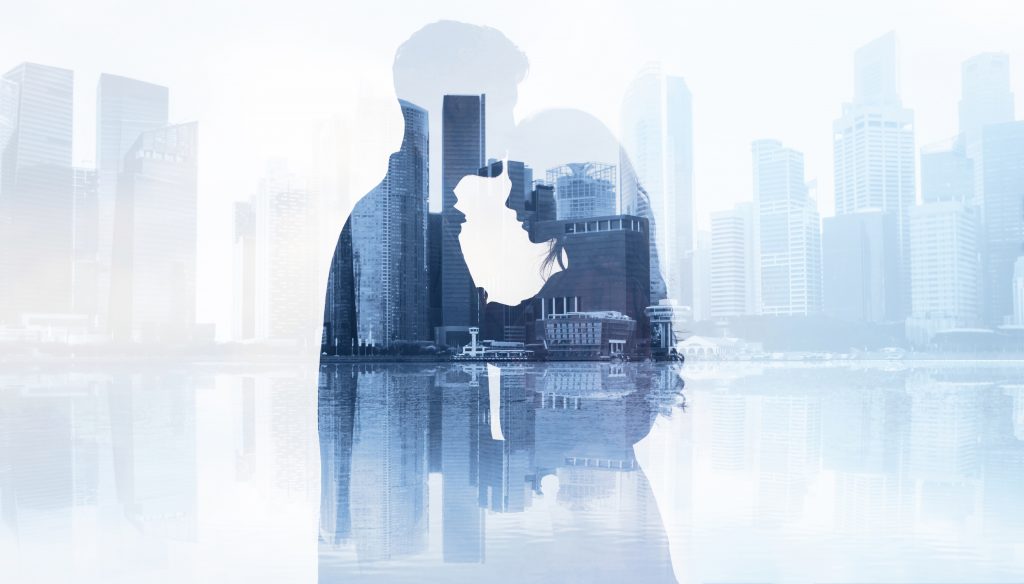 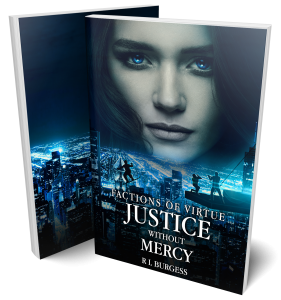 A new terrorist threat has emerged in a society already mired in discord. There is constant conflict between two factions, polarized by opposing ideological extremes. To stay in power and control the people, the ruling party has outlawed emotional attachments and family units, and replaced natural conception with a selective genetic reproduction program. They sought to engineer the perfect society. Instead, they created a police state, where Enforcers keep order while the few profit from the oppression of the many. But even the elite are susceptible to disillusionment. As an Enforcer, Agent Mercy has a comfortable life, but one devoid of connection. She is going through the motions until she meets Agent Justice. He awakens her emotions and challenges everything she has been taught about relationships. They must fight the temptation of a forbidden attachment. For Mercy and Justice to be together, they would have to break the laws they are sworn to uphold. Ultimately, she must make a choice between love and loyalty to the only way of life she has ever known.

Justice Without Mercy is a work of fiction in the dystopian, science fiction, and romantic suspense sub-genres, and was penned by author R. L. Burgess as the first novel of the Factions of Virtue series. Written for adult readers, the work does contain some use of explicit language, scenes of moderate violence, and mild sexual situations. In this near-future world, we are introduced to Agent Mercy, who works as an Enforcer for an oppressive government that seeks to shut down emotional attachments and family bonds in order to keep control of people. But when Mercy meets fellow agent Justice, she begins to feel something that could shatter her view of the world and how things are done in her society.

Author R. L. Burgess has created a cool and highly engrossing dystopian world where freedom and romance are hidden under the table, just waiting to burst free. I loved the idea of the system going against human nature because it endears us to the characters at once and helps us root for them to break free from oppression. Mercy is a great central figure for this because at the opening she is very much indoctrinated by the police state, and her awakening represents some very powerful ideas about control and rebellion. The world-building was off the charts too, with many well-described locations and influential social structures in place to add to the tension and realism of the piece. Overall, I would certainly recommend Justice Without Mercy to all dystopian and romantic suspense fans. 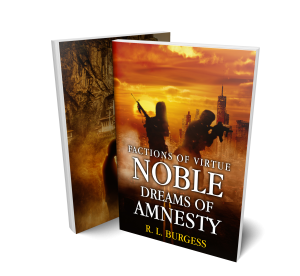 Noble Dreams of Amnesty
Is Amnesty only for the Noble?

The saga of love and war continues. After decades of conflict between morally opposite factions, society has fallen into chaos. Splitting from the ruling party, the new faction of Reformists has mounted a rebellion. They seek to abolish the systems that suppress emotional attachments and perpetuate the dominance of the genetically-enhanced minority.

Noble is no hero, but he has become the de facto leader of the war for independence. He commands a team of former Enforcers like himself, as they fight for liberation from the dystopian regime they once served. Alongside his duty as a Commander, he stumbles through unfamiliar terrain in his relationship with Amnesty, his closest friend and subordinate. Hopes for a better world weigh heavily on his shoulders as Noble strives to serve the greater good and live up to his name, all while haunted by dreams of unattainable love.

Noble Dreams of Amnesty, from the series Factions of Virtue by R. L. Burgess, is an amazing dystopian window into a shattered world, rent by the wayward intentions of a genetic engineer intent on improving humanity. By implementing a Eugenics program wielded with shallow consideration of consequence, humanity is set on a course of abuse and rivalry between friends, family, and State, that will push many to the brink of an epiphany that will change everything. Swept up in this maelstrom are three individuals: Juno Hideki-Massey, [and the titular characters] Noble and Amnesty. All three have origins molded by genetic engineering, and they are each driven by the effects this manipulation has had on their souls. The unknown ingredients in this volatile mix are the primal powers that cannot be controlled by our cells, and these powers will determine what the world will look like when the debris of war settles. Only the incredible climax to Noble Dreams of Amnesty will reveal this future.

R. L. Burgess’s Noble Dreams of Amnesty is a high quality adventure on an impressive scale. I found the characters to be extraordinary, and genuinely likable in their uniqueness and personalities; even Juno is a victim in this world. The casting is perfect, and their fit within the primary plot has been accomplished sublimely. In addition, all the subplots are wonderful stories in their own right and provide for high quality parallelism as the story evolves. Empathy’s journey is perhaps the most notable of these, and her contribution to the emotional power of this book is unquestionable. That is perhaps the stand-out for me; emotional power that the reader cannot resist. Noble Dreams of Amnesty is simply an incredible read, and I wouldn’t hesitate to recommend it to anyone.